Twilight polo: The path to 25 years

It is often said that the game of polo is 80 percent about the horse. At Twilight Polo, the wellbeing of the horse is always the top priority. Photo by Tony Gibson.

When the volunteers start welcoming spectators through the Great Meadow gates on May 19, they will be ushering in a new chapter for Twilight Polo. Not because of any significant changes—though the arena is indeed newly renovated—but because journalists and historians like to organize years of operation into tidy batches of 25, and 2018 happens to be 2 ½ decades after the first polo ponies thundered by the boxes in a freshly constructed arena.

As time sometimes seems to proceed at full gallop, it is worth taking a moment to pause and reflect on Twilight Polo’s path to its silver anniversary. After all, it was a bold investment, and a lot can change in 25 years. To put the year in perspective, Jurassic Park topped the 1993 box office. Bill Nye the Science Guy debuted on PBS. Helen Hayes died, and Ariana Grande was born.

Crowds and the players have a mutual admiration for each other and the sport. Photo by Tony Gibson.

The Great Meadow Foundation was only nine years old, and the equestrian scene in Fauquier and Loudoun Counties largely centered on hunters, jumpers, steeplechasing and fox hunting. The area’s only polo field was not open to everyone nor geared toward spectators. However, just on the other side of the Potomac River, “Big Joe” Muldoon and his mallet-swinging family were the center of a vibrant polo community.

As a friend—and polo recruit—of Muldoon’s, Peter Arundel recognized a vacuum of accessible polo in the heart of horse country and sought to fill it. Arundel recalls Muldoon telling him, “If you’re going to start polo in Virginia, you’ve gotta come watch us play up in Pittsburgh.”

Arundel drove up to watch the tournament, which had raised $1,000,000 for charity in just five years. “It was a cow pasture that was shaped like a bowl, so cars were parked all around,” he recalls, adding that the three-on-three game was played on grass with an arena ball—though the audience didn’t seem to notice or care that the match was not strictly to regulation. “All they cared about is that they could see it, and watch it, and taste it and feel it.”

The program for the inaugural 1994 season of polo at Great Meadow served as a primer to the sport, aimed at an audience new to polo. Photo by Callie Broaddus. 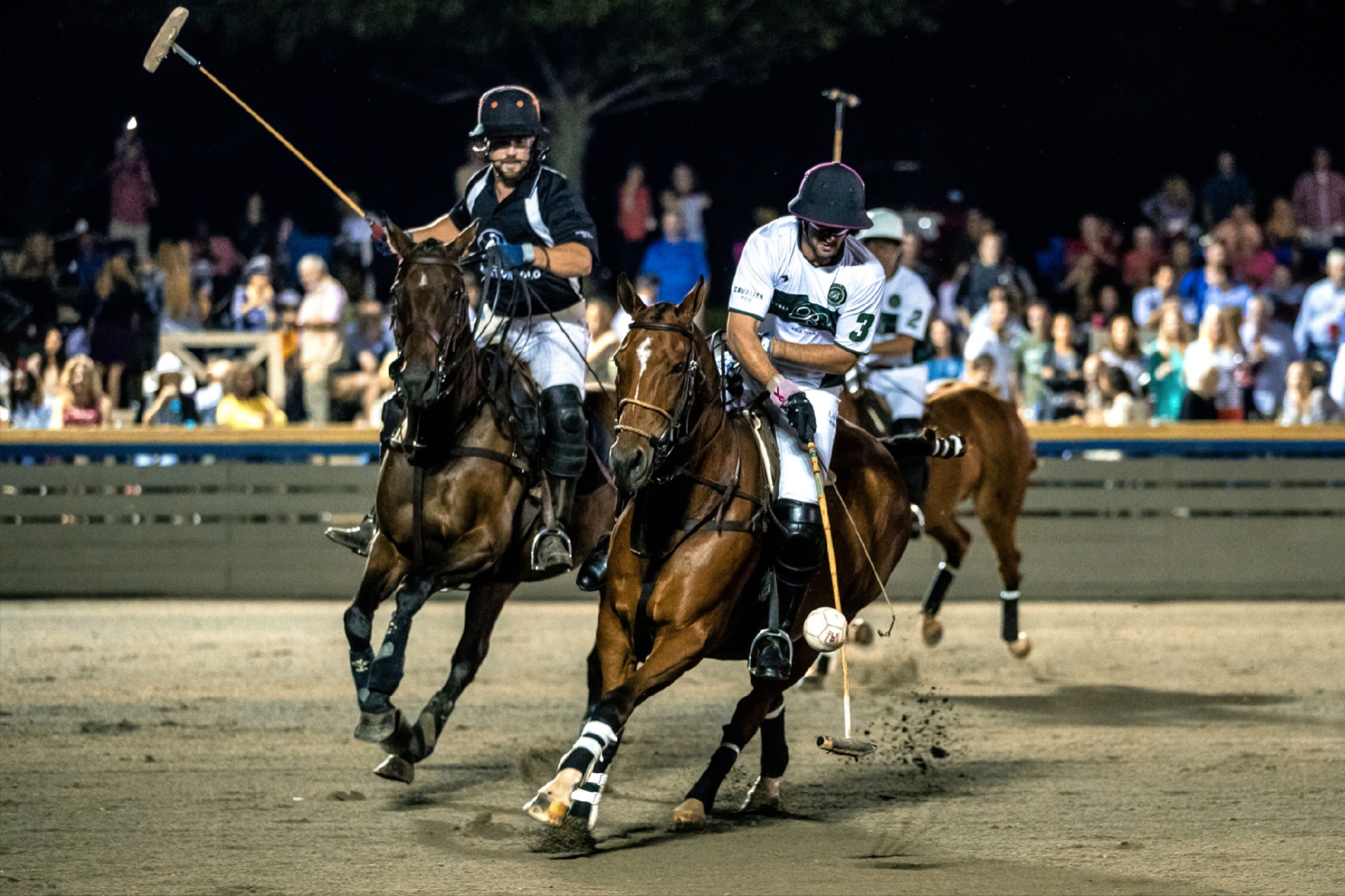 A Beverly Equestrian team member takes a near side fore shot. The rules of polo are structured to keep the ball moving at all times; stalling with the ball can prompt the referee to call a foul. Photo by Tony Gibson.

This experience taught him that an arena with a birds-eye view would make the game more accessible and entertaining for spectators, and it proved the incredible potential for charity behind a crowd-focused event.

Arundel’s father, the late Arthur “Nick” Arundel, saved Great Meadow’s 250 rolling acres from development in 1982. As an avid horseman himself, the elder Arundel was a ready supporter when his son approached the Meadow Outdoors Foundation board with a proposal for a USPA-sanctioned polo arena—complete with a spectators’ berm—at Great Meadow. The board approved the proposal, and so begins the story of what would soon become known as “Twilight Polo.”

But the first match to kick up dust in the newly built arena did not take place at twilight. It was scheduled for mid-afternoon on a sunny September day. Peter and his teammates at Great Meadow Polo Club had big expectations for their grand opening match.

“We promoted the heck out of it in the local papers and told all of our friends to tell their friends,” says Peter, adding that they even flew several professional players in for the event, including Canadian Philip Lake and Charlie Muldoon from Wellington, Florida. 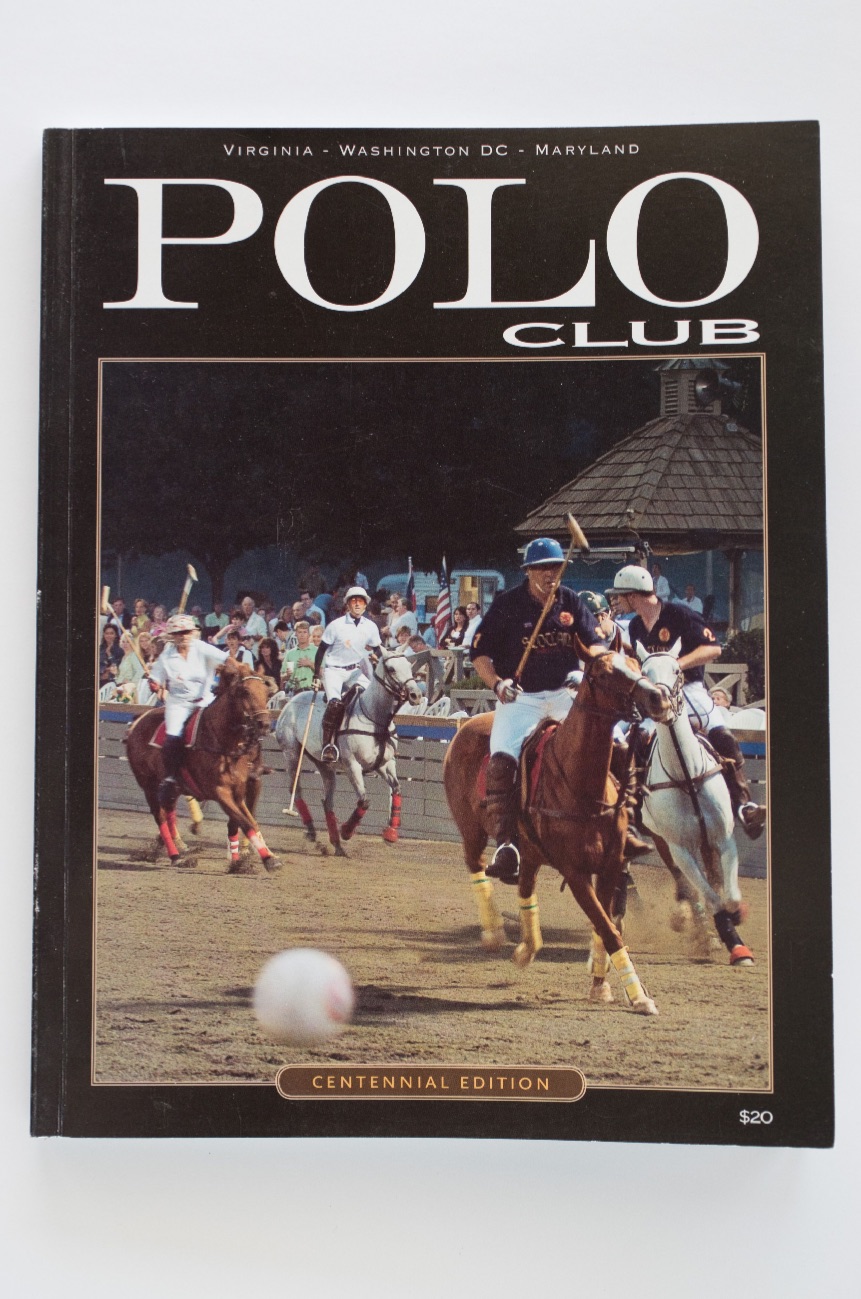 The 2008 Polo Club Centennial Edition magazine was produced to celebrate 100 years of polo in Virginia. The first recorded game of polo ever played in Virginia was in September, 1908. Photo by Callie Broaddus

A self-deprecating grin starts to spread across his face as he recalls his anticipation of the turnout. “We walked into the arena to a crowd of at best 50 spectators,” Peter recalls turning to his teammate and partner, Juan Salinas-Bentley, and saying, “I thought if we built it, they would come. What happened?”

Well, what happened next was the decision to move polo to 7:00 pm for the start of the first full arena polo season in June, 1994. A poster bearing the headline “Friday Twilight Polo” and an image of that first polo match of the previous year billed the event as “Friday nights under the lights.” And according to Peter, “We never looked back.” 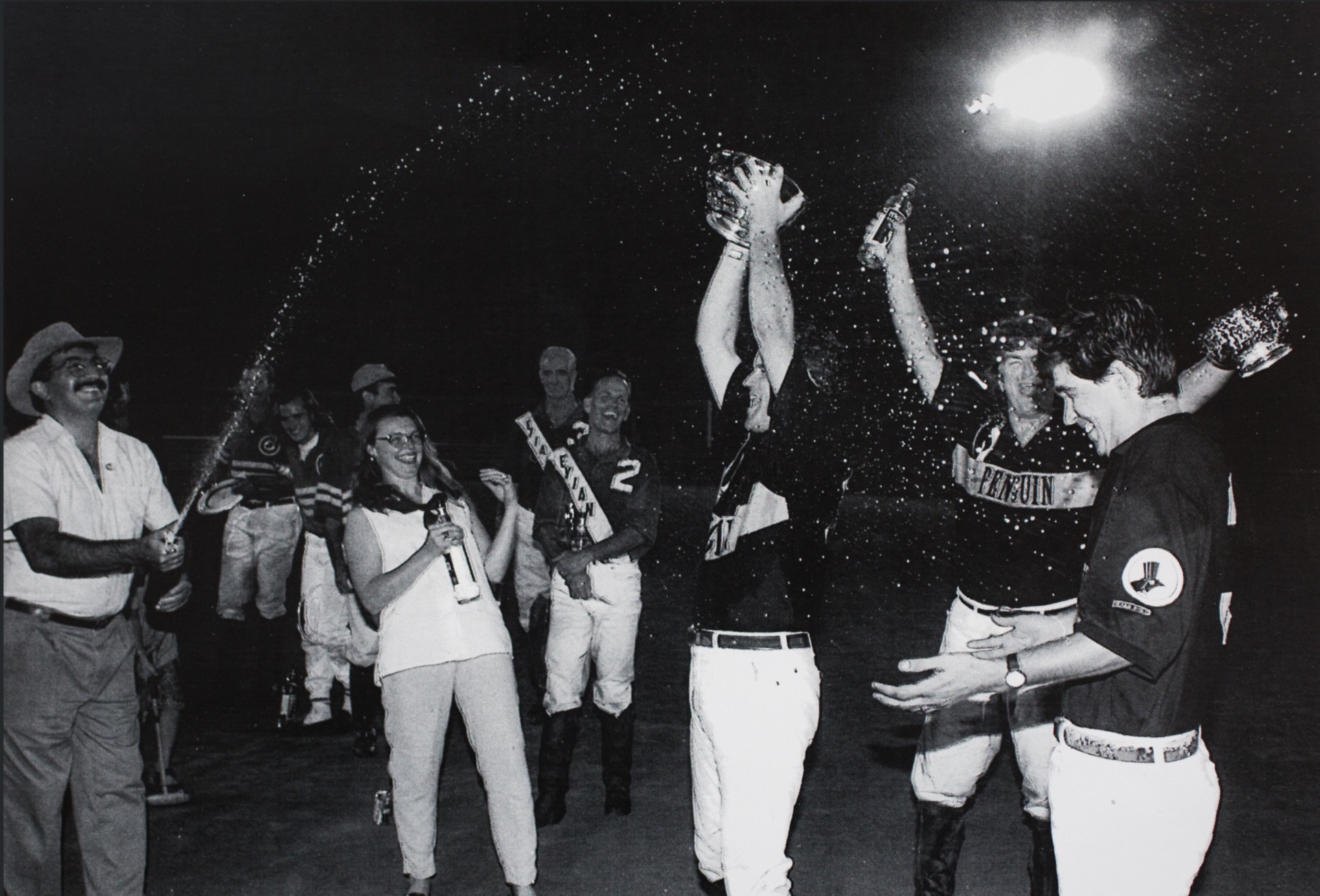 They may never have looked back, but the future would still hold plenty of opportunities for growth and direction for the nascent event. One such formative opportunity came when Twilight Polo hosted the finals of the U.S. Arena Open, an event then-president Dr. Phillip A. Karber called the “Super Bowl” of polo. The play of the game was intense, aggressive and without the convivially competitive nature for which Twilight Polo had become known.

Doug Barnes goes for the goal with Michael Grams in hot pursuit! Photo by Tony Gibson

“Sure it’s prestigious to say Great Meadow is the host of the US Open, but what real good does that do? Does that really advance polo in the hearts and minds of the general public, the general equestrian in Middleburg?” asks Peter, who was also playing some high-level polo at the time, finding that it stripped some of what he loves from the game. “The players’ attitudes change when there’s silver on the line. It becomes un-fun fast.”

Engagement with the spectators is a keystone of the Twilight Polo model, which often draws crowds of around 2,000 people out on a summer night. Photo by Tony Gibson.

Around that time, in 2007, Twilight Polo gained a new general manager in the form of John Gobin, then ranked as one of the top-10 American polo players. Gobin and his team recognized the impact of the evening rush hour commute on Route 66 and took the risky step of moving the series from Friday nights to Saturday nights.

“It made a world of difference,” stresses Peter, “moving the weekly attendance from an average of 1,000 to an average of 2,000 or 3,000. It was a dramatic shift in the business plan, but it was a very smart move.”

The entrance to Great Meadow. Photo by Callie Broaddus.

Ever since “Ride for Charity” was emblazoned on the program and poster of the inaugural year, the ethos at Twilight Polo has been one of community, accessibility and family fun. Gobin has taken that ethos and solidified it into the core brand of Twilight Polo. On Saturday nights at Great Meadow, from May until October, kids are not merely allowed; they’re part of the show. Children chase down balls that cross the arena walls, ride “Splinter” the wooden horse, engage in foot races and, of course, battle to the dust in tug-of-war.

The format of the event itself is broken up into earlier matches of less-experienced players and an 8:00 p.m. match aimed at getting the crowd fully hyped up with fast-paced play. But the game never takes on the brutal nature Gobin experienced first-hand in the U.S. Arena Open. In fact, the players are even asked to leave their spurs at home to ensure the atmosphere of the game always stays family- and pony-friendly. 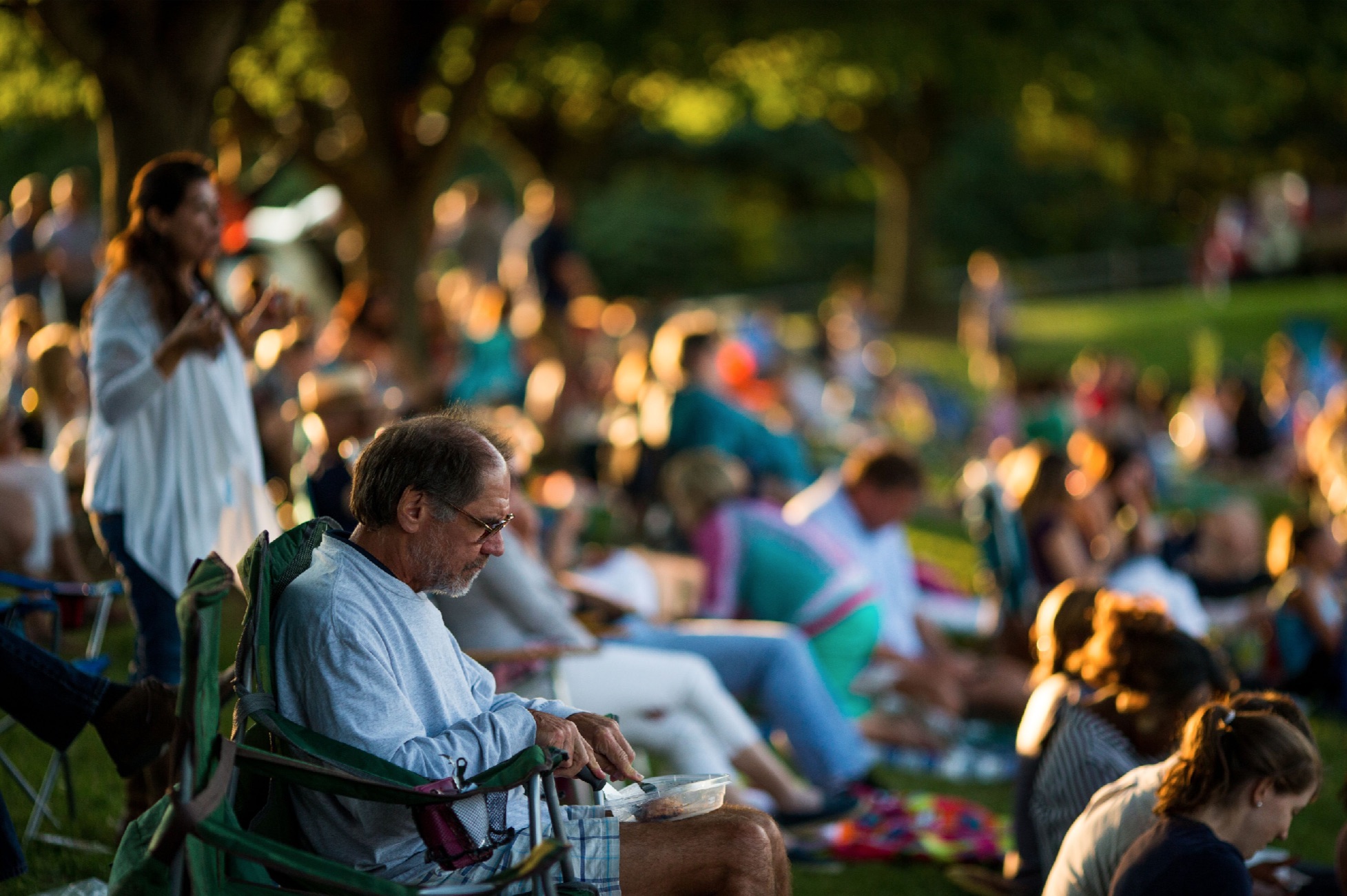 When Arundel’s team designed the arena 25 years ago, they created a berm that would allow all spectators to have a good view of the game, whether they have box seats or a picnic blanket. Photo by Tony Gibson. 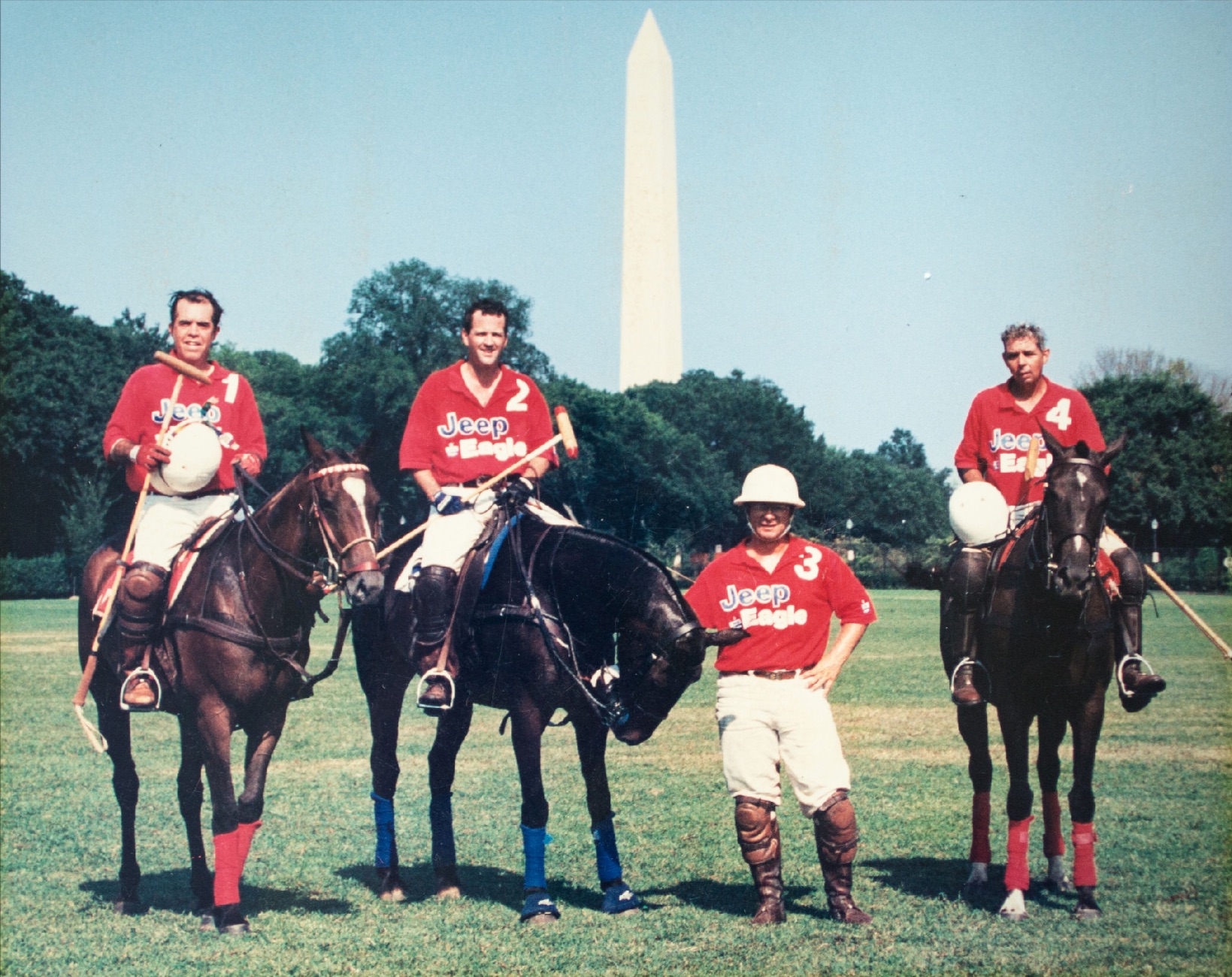 Before the polo fields in The Plains, Great Meadow Polo Club’s home field was the National Mall. Club president Dick Vargé, founder Peter Arundel, a pro, and member Tom Leonard pose for a photo in the 1998 season. Courtesy of Peter Arundel.

David Greenhill, publisher of this magazine and owner of Greenhill Winery & Vineyards in Middleburg, learned to love the sport under Gobin’s encouragement and teaching ability. “Polo is a life-changing event,” says Greenhill. “It teaches one discipline and dexterity on so many levels.”

ug-of-War is a family-favorite fixture at Twilight Polo. John Gobin (center) officiates this competitive matchup of boys vs. girls. Photo by Tony Gibson.

Recognizing the need for arena renovations, Greenhill provided the required funding, ensuring the longevity of the arena’s deck through the next 25 years of polo. “I’m very proud and humbled to participate with Great Meadow in the promotion of this magnificent sport, in particular, Twilight Polo, which has brought so much fun and happiness to players and spectators alike,” says Greenhill. “John Gobin has done an amazing job at making Twilight Polo such a success through the inclusion of families into the thrill and excitement of the up close and personal feel of arena polo.”

Robert Banner, president of the Great Meadow Foundation, says the arena will be renamed “Greenhill Stadium” in recognition of Greenhill’s support. At this juncture between the last 25 years and the next, Banner salutes the founders of Twilight Polo. “What they did was not easy, at all,” he says. “Their visionary thinking saw an opportunity to share an already popular area sport with so many.”

Young spectators are enthralled by the fast-paced play in the arena, where fetching a stray ball could earn them a dollar. Photo by Tony Gibson.

Through the efforts of Muldoon, Arundel, Salinas-Bentley, Gobin, Banner, and all those surrounding them who are too numerous to properly credit, Polo has become an integral part of the equestrian community in and around Fauquier and Loudoun Counties. “Today, I look back and see how the Twilight Polo model gave birth to four other arenas, 15 grass fields, and countless new players over the last 25 years,” says Banner. “In fact, it has helped fuel a resurgence of arena polo across the nation. I can only imagine how the sport will benefit over the next 25 years from the goals achieved here. 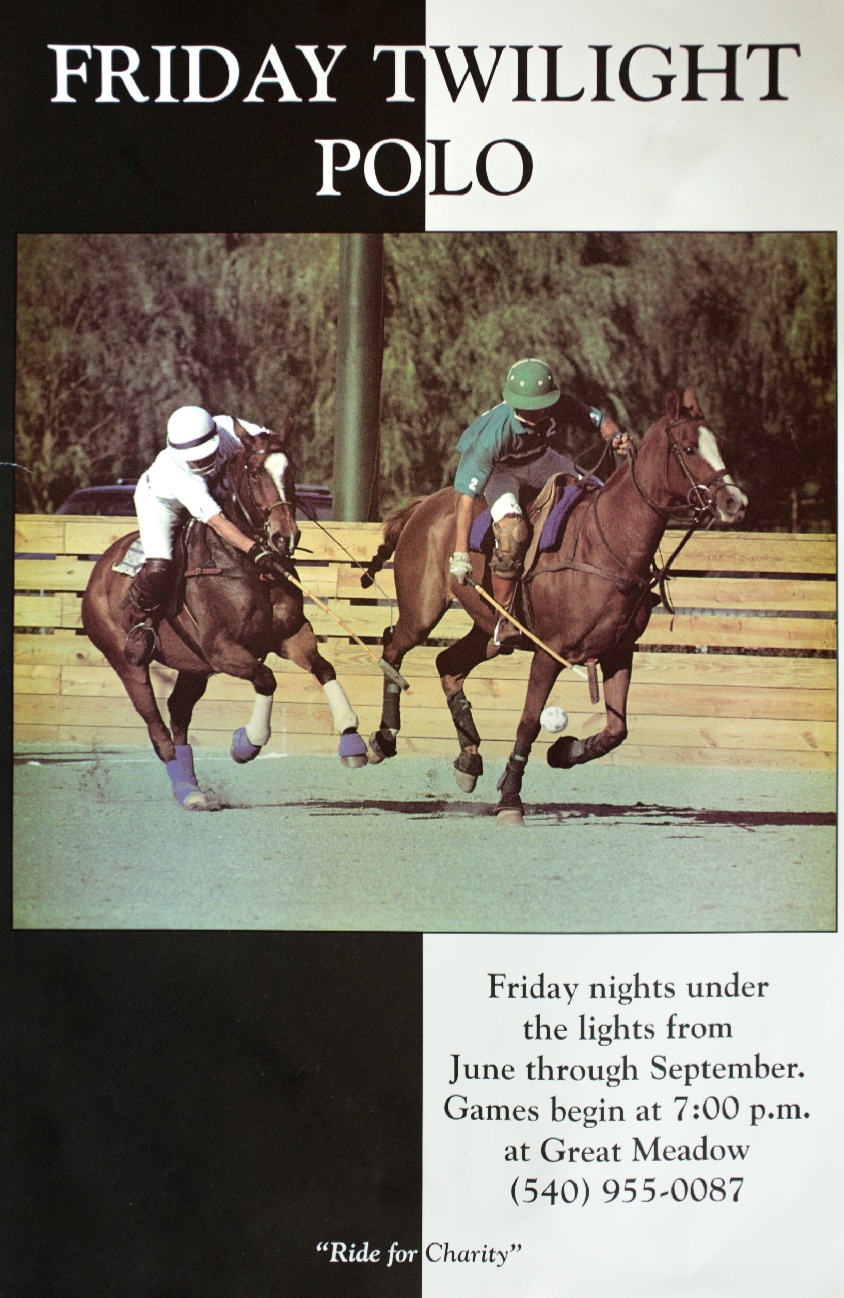 The first ever poster for Twilight Polo, featuring an image from the first game ever played at Great Meadow, in which Peter Arundel (left) reaches to hook Phillip Lake, a Canadian professional player. Photo by Callie Broaddus.

“Great Meadow will continue to innovate, promote and celebrate ‘polo for the people’ from our arena,” Banner promises. “We hope the community will continue to support the first, the original and the best way to take so much fun to so many.” ML